“Katie’s Chinese?” said my nine-year old in a quizzical tone.   Total disbelief hung in the air.  “Adopted? Are you sure?”    He and my daughter were discussing a neighborhood playmate, a child that they’ve known for close to a decade.   Their exchange humbled me.   Could these two really have not seen any differences as they laughed & played with this beautiful little girl?    Their conversation got me thinking about the impact of what we see, and don’t see, in transition.

Differences.  One of the most difficult barriers I’ve faced in transition has been a self-created wall forged by perceived differences.   I erect these edifices around work, or better said, the viability of certain work.   Butcher?  Baker?  Candle Stick Maker?   Should it matter?   One of my favorite Novofemina vignettes was Wellesley High School English teacher David McCullough’s, “I urge you to do whatever you do for no other reason than you love it and you believe in its importance.”

Could it possibly be that simple?

I remember standing with a nurse practitioner in my daughter’s pediatrician’s office about 8 weeks after she was born.  We were discussing my upcoming return to work.  I shared with her that I loved to work.   “A happy mother is a happy baby,” she generously replied.    I embraced that sentiment and grabbed my briefcase.

More than a decade earlier I volunteered to serve as a campus host at HBS for an upstart company, Microsoft.  It was 1990.   My volunteer status allowed me to join the visitors from Seattle as they unpacked boxes of swag and brochureware in anticipation of a student-centered recruiting fair.   Today we might get concerned about the unequal access to recruiters that this program gave students.   Who knew?

What little I did know about Microsoft at the time came from an afternoon with Bill Gates and Steve Jobs who had visited campus to meet with students.   They stood side by side and discussed their opposing views of the emerging tech sphere.   Incredible.

As I unpacked boxes with a nerdy Microsoft representative,  he asked if I was interested in the company.  ‘No’ is all I offered.  He thanked me for helping – instantly behaving as if it took a near bribe to get a volunteer for Microsoft amidst the finance / investment banking culture that was HBS.

Here’s the rub.  I was interested.  I really blew it.

My response that day was a mixture of embarrassment, self judgment, wavering confidence and fear.  How could I possibly say that I was interested when I knew so little about the company?  I also thought that Microsoft was too grandiose for me.   What would they possibly want with me?

Differences.  I saw many that day as I responded to my nerdy friend.  In reality all were driven by my own internal critique.  Few were probably valid  But, they stopped me from pursuing an avenue from which I could have learned.

This week I happened upon a compilation of teachings from a Zen master, Shunryu Suzuki, in Zen Mind, Beginner’s Mind.  In it he shares, “In the beginner’s mind there are many possibilities; in the expert’s mind there are few.  When we have no thoughts of achievement, no thought of self,  we are true beginners.  Then we can really learn something.   The beginner’s mind is the mind of compassion. When our mind is compassionate, it is boundless.”  (Zen Mind, 2006 Shambala,, pg 2+) 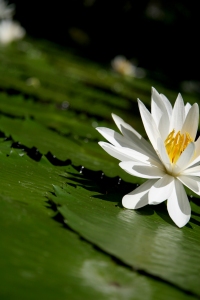 Maybe it won’t surprise you that I got back to technology.  Found my way to a start-up.  To unending possibilities.   I fell down but I got up quickly and kept iterating.

In my transition I’ve firmly adopted an experimental learning approach.  I am quick to acknowledge that I don’t know the David McCullough answer for me.  But, I am fully dedicated to creating scenarios that might be ‘it.’  I freely engage in all manner of experimentation to test the scenarios before any full-scale embrace.  I’m really learning.   Maybe I can now begin.

This Thanksgiving I am grateful for this transition journey and the possibilities it has opened up for me.  May we all be driven not by the desire for achievement but by possibility and humility and gratefulness.   For those willing to enter transition I truly believe it’s gift to us boundless-ness.

Do you have another moment?   Read Novofemina’s past Thanksgiving Posts:  2012 Transition Suspended,  and 2011, Voices of Transition: An Ode to Networking.  Or Her Place at the Table & Thanksgiving Treats.